Controversy around the Oscars

Traditional way of covering the Academy Awards by the media was usually just listing the nominations, speculating the favourites and how spectacular the ceremony will be. Recent years brought us another topic to chew on: diversity in the film industry and the Oscars in specific. There is plenty of controversy around it, with a wide spectrum of opinions. It seems like there is no way of pleasing everyone. Hollywood has a rich tradition of being liberal and forward thinking, it's a mainstream oriented business trying to follow the spirit of times and adjust to it. At the same time, they also try to lead, promote and educate, forming their target market.

Since 2015 and the #OscarSoWhite movement, people raised the question of the lack of minorities among all nominations, but most visibly in the acting and best picture categories. In the following year the Academy set specific inclusion goals for the next five years, and from 2020 they created the list of representation and inclusion standards as a part of the Academy Aperture 2025 initiative. The goal of these standards is to diversify on and off-screen cast and give an equal opportunity to everyone, helping all misrepresented groups get their voice in the film industry.

To some, this seems forced, patronizing, and even demotivating to the minorities, because they get praised not by the quality of their creation, but by a set of inclusion rules. Data science can help us point trends and anomalies in the rich Academy Awards history, hopefully leading the debate towards making informed decisions.

Is there ageism in Hollywood and why?

We wanted to focus not just on ethnic and racial diversity, but also on gender and age patterns. In the multidimensional line chart below, we pulled out data regarding the number of nominees and winners in different age and gender groups. 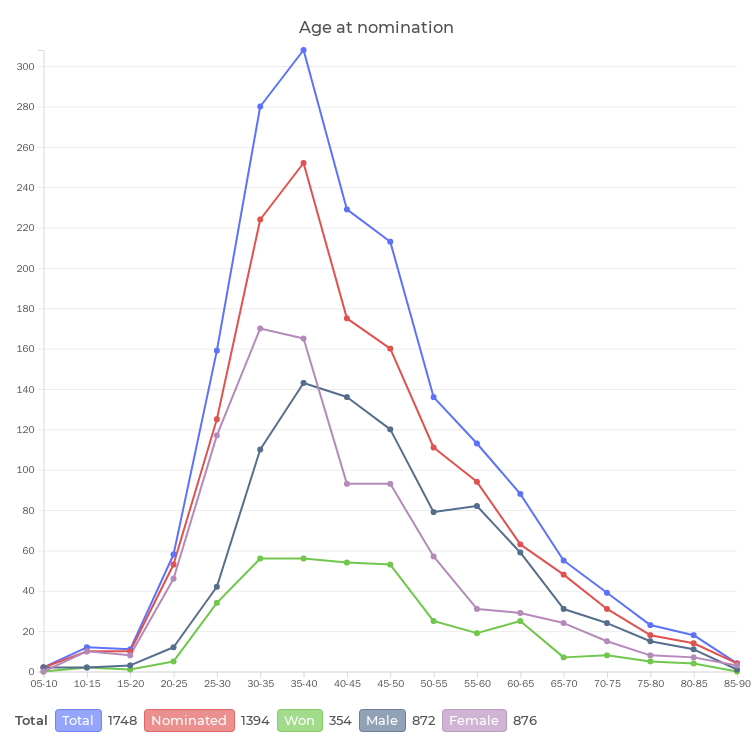 First, let's focus on gender differences. As we can see in the chart above, unsurprisingly, lines tend to resemble a bell curve, a normal distribution correlating with the actor's working age. But, when we focus on different age groups we can see that some age ranges are favored more than others. So, we see that the highest number of women nominated is in the age group between 30 and 35, while most nominations for men are in the 35-40 group.

This can be caused by various reasons, but the practice shows that Hollywood prefers younger women. Also, a relatively sharp drop after the peak may be because women at that age usually decide to start a family which is time-consuming and usually ends up in a career break for several years.

For men, on the other hand, the “best years” for getting an Oscar is between 35 and 40, which is probably due to the fact that men at that age are considered more matured and experienced as actors, and also have more opportunities to get leading or supporting roles. We can see there’s a slight peak in the range from 55 to 60, which can mean that Holywood tends to “reward” elder actors at the end of their career, but also it can mean that they try to be more active and "catch" the last whiff of their career and leave something valuable behind them.

Women directors are still an exception

Although the actors and actresses are more visible, primarily because they are the faces of the movie, there are many other lines of work in the film industry where we can notice great differences in gender and race ratios. One of those is the director of the movie. We get used to seeing the same men year after year and never question why there aren't more choices, or as a matter of fact, any women in this category. Dame Heather Rabbatts, Chair of Time’s Up UK, a group which was founded in 2018 by some of Hollywood’s most high-profile actresses in response to the #MeToo movement, gives us a partial answer to this question. One: “people tend to recruit in their own image,” ie the majority of directors are male, and they hire men. Two: “[directing] has not been a role where women have seen many other women role models.” (source: BBC)

The pie chart below shows that from the total of 450 nominees in this category, there were only 5 women directors. Although the Academy Awards could represent women directors more, the problem seems deeper. There simply aren't enough women to be nominated. 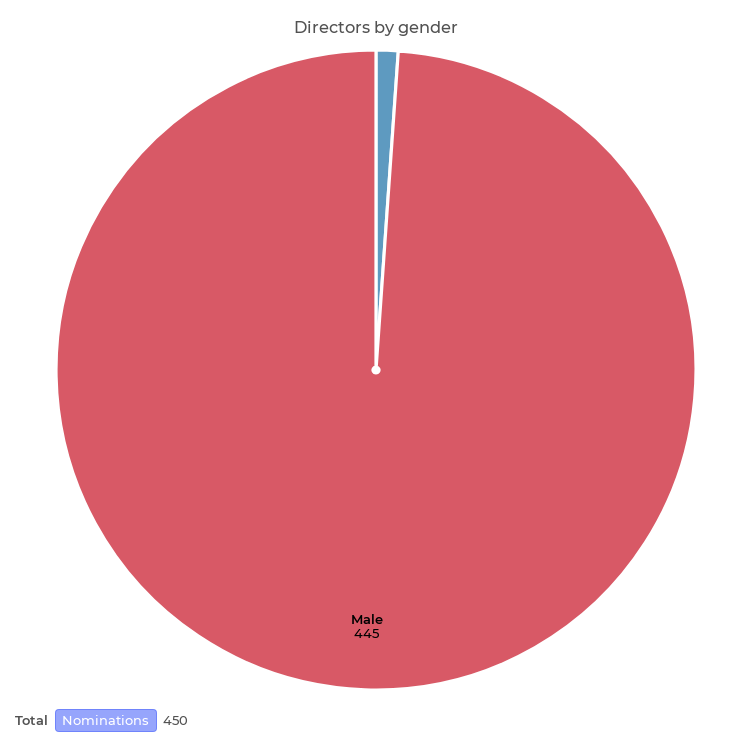 Lack of female film directors can be traced back to the education system, where they usually don't feel adequate or motivated for this profession. In mostly male surroundings, it's hard for women to feel appreciated for their work, without the shadow of their gender hanging above their heads. One of the examples we discovered recently is Gale Ann Dorsey, a bassist and vocalist mostly known for her work with David Bowie, who attended the California Institute of the Arts on full scholarship, but decided to give up after three semesters because she felt unsuited. It's not too surprising she felt that way, since she was the youngest, black, and only female admitted to the Live Action department at the time.

Sexual orientation in Hollywood, or how we became more accepting

Over the last two decades, we could’ve seen an increase in LGBTQ representation in movies and TV shows, and it helped immensely getting them more accepted. Film industry did a great deal of breaking the stigma around the LGBTQ population but there is still a long way to go, especially abroad.

As we can see, around 6% of all the nominees in acting categories are from the LGBTQ population. If we look at the statistics, we can see that there is 4,5% of the LGBT population in the whole USA, which means that the Oscars nominations reflect the reality pretty well.

What is interesting in these statistics is that there is a slightly higher number of openly gay or bisexual men, than there are women. The reason for this can be the culture of over-sexualization of women, which leads to the wide-spread opinion that if a female is attracted to the same sex, she somehow becomes less attractive, or at least less interesting to men.

The pressure of behaving and looking "on point" at all times created an unhealthy atmosphere for the celebrities where they are pushed to be flawless, constantly working on their image and commercial potential. It's understandable why there's a hesitation among them when it comes to talking openly about their sexuality, if it can damage their careers.

Are the actor's race or ethnicity influencing the chances of winning an Oscar?

The first half (and a better part of the second half) of the 20th century wasn't that great for non-white actors and actresses. Most of them didn't even get the opportunity to be in a movie, let alone get nominated. The first African-American person to be nominated AND win an Oscar was Hattie McDaniel. After her, there was a 10-year break in nominations of minorities, and the trend continued until the '90s when the inclusion of African-Americans became something accepted and encouraged by the Academy, but still, it seemed like it was just for the show. 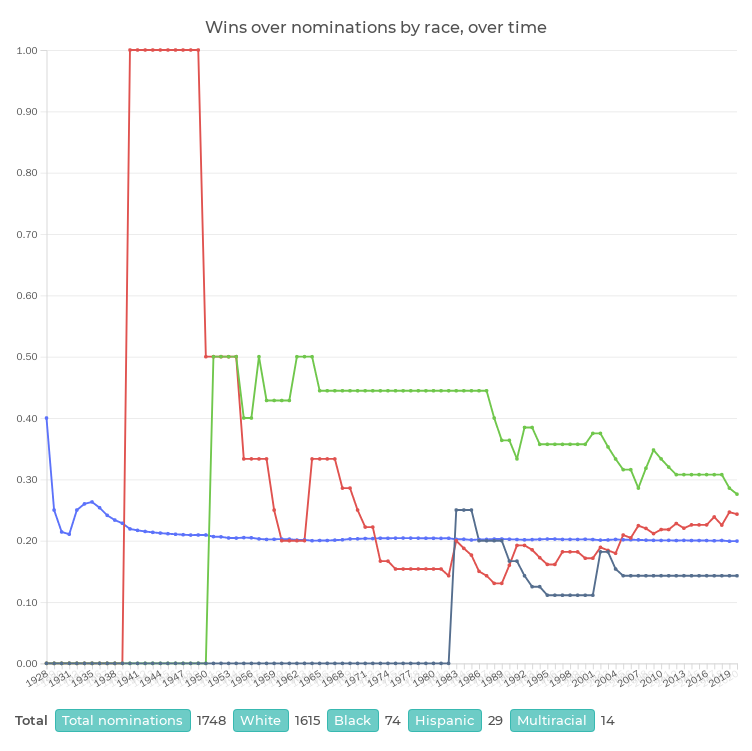 The line chart tracks the overall chance of a nominee winning an Oscar based on the race, over time. Up until about twenty years ago, a nominated African-American had less chance of winning an Oscar than a nominated white person. That changed in 2005. Hispanic ethnicity is also above the one in five chance of winning, which means there is a slight affirmative action (or compensation) towards minorities. On the other hand, actors of multiracial ethnicities are not favored. Their nominations somehow go under the radar and have less chance of actually winning. Most notable representatives of this group are Ben Kingsley (English/Indian, four nominations, one win), Isabelle Adjani (France-born Algerian/German, two nominations, no wins) and Halle Berry (English/African American, one nomination, one win). Remaining ethnic groups have too few nominations to confidently estimate any trends.

How friendly Academy Awards are towards foreign nationals?

Immigration did a great deal for American culture. People are coming from all around the world chasing the American dream and incorporating bits of their own culture into this huge pot of multi-ethnic soup. Here we can see that most of the nominations to foreign nationals (excluding England) before the 2000s went to the actors from France, but also Canada and Australia. After the 2000s Australia took over the lead and doubled its nominees, with Ireland following. 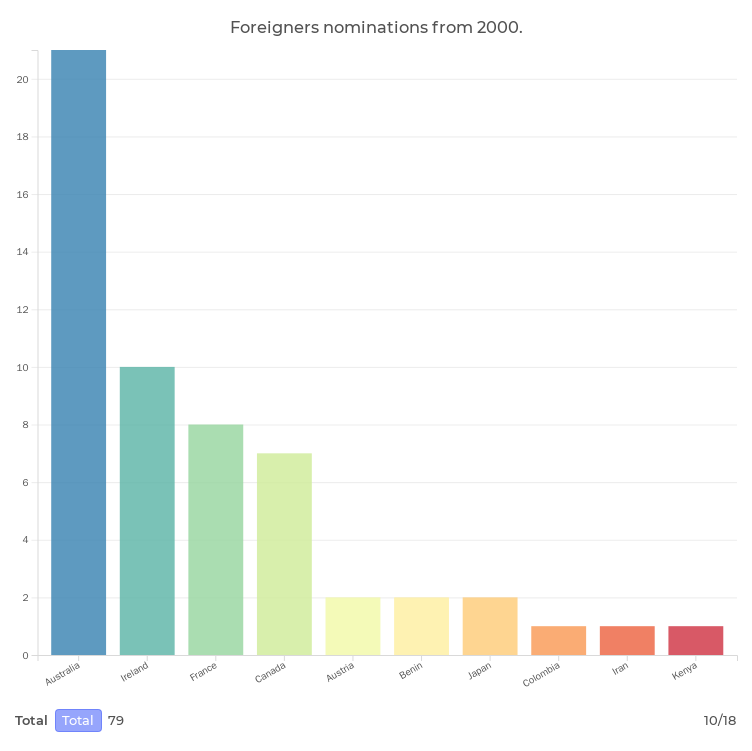 Most actors and actresses come from the first-world countries, which could explain how they even got a chance to star in Hollywood-produced movies. Artists from poorer countries usually don't have an opportunity to leave their home and pursue a career in Hollywood, since the economy and political factors play a major part here. Even if they manage to move to the USA it's a long way to be noticed when you are coming from a small country such as Bulgaria for example. (Kudos to Maria Bakalova who just got nominated for Best supporting actress)

One of the reasons why we don't see people from less known countries may be the language barrier and the fact that for some nationalities it's much harder to get rid of the accent, leading to a really small amount of roles that actors can take, usually limiting them to only playing people from their country of origin.

Statistics help us understand the past and improve the future

Datoris is a business intelligence tool, we used it to demonstrate its capabilities and discover some interesting facts in the process. Collecting the data, cleaning it up, joining different sources, then exploring to come up with charts revealing something original, and wrapping it all in an article or a dashboard explaining the findings is something we do and can help you with. Feel free to Contact us if you have any questions.

Air quality in Europe throughout the year